By now, if you have teenage children, you’ll likely have heard about the social media app TikTok. Launched in China in 2016 under the name ‘Douyin’, the app has exploded in popularity – App Store and Google Play customers around the world downloaded TikTok almost 115 million times in March 2020 alone. With huge celebrities using the platform to launch their music and viral TikTok challenges keeping us entertained, it’s not difficult to see why the platform has done so well.

Nonetheless, the app has not been without its share of criticism. In February 2019, for example, TikTok was fined $5.7 million by the Federal Trade Commission for illegally collecting children’s personal information, including their locations and email addresses. And, in July 2019 the app was placed under investigation by the Information Commissioner’s Office in the UK to uncover if the app breaches General Data Protection Regulation (GDPR) by allowing the same services to be provided for both children and adults. Ultimately, this investigation is about making sure the proper protections are in place for younger users.

To understand why policymakers view TikTok as a risk, it helps to know how the company works. TikTok is owned by the world’s most valuable startup, a Chinese company named ByteDance. But TikTok does not operate in China and functions as an independent subsidiary.

Policymakers’ chief worry is that ByteDance could be forced to hand over TikTok’s data on US users to the Chinese government, under the country’s national security laws. In response, TikTok has said it stores American user data on US-based servers that aren’t subject to Chinese law, however skeptics argue ByteDance is ultimately a Chinese business that’s still beholden to Beijing.

Indeed, President Trump announced that a deal would have to be struck with a US company to sell the US operations of TikTok by the 15th September, or TikTok would be banned from the US App stores. While at first it was thought that Microsoft would buy the US Operations portion of TikTok, its bid was rejected on the 14th September 2020.

Shortly afterwards, technology security firm Oracle announced it was chosen as TikTok’s secure cloud provider and will become a minority investor with a 12.5% stake.

It is understood that ByteDance will own the remaining 80% of TikTok. However, because 40% of ByteDance is owned by U.S. venture capital firms, the Trump administration can technically claim TikTok Global is now majority owned by U.S. money. 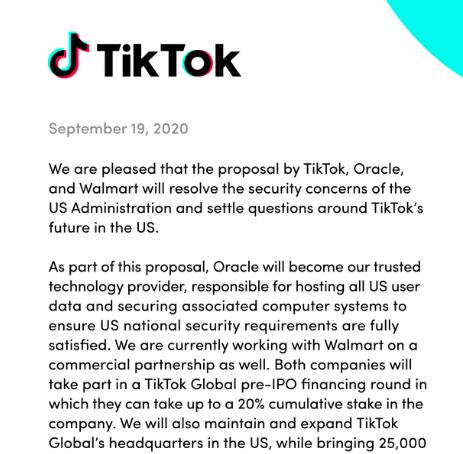 Will the ban still go ahead?

As of the 26th September 2020 the ban still looks set to go ahead, beginning at midnight on 27th September. People who’ve already downloaded the app would be able to keep using it, but the company wouldn’t be able to add new users in the United States. Here, the download prohibition would likely prompt users, and perhaps more importantly for TikTok, Influencers, to begin focusing on other apps, like Triller and Instagram Reels. As a result, TikTok has filed a lawsuit to halt the ban. A court decision is expected on the 27th.

Although TikTok’s links to a private Chinese company are worthy of concern, (especially for employees involved in national security, like servicemen and women) for many users it is the data and privacy measures that may worry them the most. While it is true that TikTok does gather a lot of data on its users automatically, for example geolocation information, IP addresses, unique device identifiers and the content of in-app messages, this is the same as many other social media platforms like Facebook.

Reviewing the privacy settings is essential for users to control the amount of data the platform has access to. Ultimately, in today’s digital age there are many ways for malicious actors to get hold of your data – while we are right to be wary of any company that in theory could farm data without our permission, the threat TikTok poses to the average user is limited.

Do you have any other topics you’d like us to cover or have any questions? Leave a comment in the section below.